Inspired by Dada typography and poetry circa 1920. The DaDa movement had much in common with the Italian Futurist movement. One might even consider DaDa to be the more impish cousin of Futurism, for both movements shared ideas relating to the disruptive nature of art as well as exuberant self-promotion.

The dada aesthetic of anti-aesthetic, that is, random or chance selection, so well exhibited by the works of Marcel Duchamp, Hans Arp, Richard Huesselbeck, and the collage works of Kurt Schwitters is the basis for this font. The typography of the Dadaists, which used random lettering styles and uneven composition, were highlighted in many of the Futurist posters and poetry works, which also used onomatopoeic devices within their compositions.

History of the P22 Dada Font

Version 1 – 1995-1996. Made initially as an experiment and then in a limited quantity for one or two Museum gift shops. Not included in P22 catalogs, this font P22 Dada (menu name P22 Dada Ultra Demi Bold Medium Oblique Condensed) took a Dadaist approach to font design. Using the Postscript bitmap limitation to its fullest (where in then contemporary Mac OS, the screen font featured bitmaps for each size of the font. This way 10 or 12 point fonts could be hand modified to be more readable). The Dada font has 10 sizes of bitmaps. Each size rendered the font in a different way. Some substituted letters or images some shifted the position up or down. If something was set in 12 point and zoomed in 200%, the 24 pt. bitmaps would take over. More mischievous than most fonts, this could prove frustrating to a designer intent on actually using it to design with. The original read me file stated “Macintosh users who use PostScript fonts will have an especially amusing/frustrating time with this font. The on-screen bitmaps may not coincide with what prints out. Do not call technical support-they are instructed to hang up on you.” and “There is no need to design a page while using this font. Just type and print. Chance will design your page.”

The packaging for this limited edition mimicked the original P22 font packaging in dimensions, but used a random shipping carton with some printing, cut into a 7″ x 7″ square and then attached an AOL solicitation floppy disc with the Dada font overwriting the AOL data held onto the board with a rubberband.

Version 2 – 1998. Same font as version 1, but packaged as a bonus font with the Futurismo soundtrack Audio CD. By this time, individual point size screen bitmaps had become somewhat obsolete and the randomness of the screen font was downplayed.

Version 3 -2006. The original idea of the Dada font and randomness was given new life with the introduction of OpenType programming. The new version includes over 500 glyphs of letters and images and can be used to create Dada inspired typography by simply selecting various features such as: Contextual Alternates: Replaces Glyphs in sequence from largest to smallest. Ligatures: When proceeded by a space character lowercase letters will ascend and rotate indefinitely (best used with small caps feature)
Discretionary Ligatures: Similar to Ligatures features only letters randomly rotate and baseline shifts after each word. Small Caps: Changes upper and lower case to Smaller Upper and Lower Case Glyphs. Titling: Changes Uppercase to Condensed Tall Uppercase and Lowecase to Square Heavy Uppercase. Swash: Changes Lowecase to Ornate Upper and Lowercase letters. Oldstyle Figures: Replaces Numerals and ! @ # $ to ornaments. Fractions: Random assortment of Opentype substitutions meant to confuse and complicate word processing.

Users may wish to adjust the leading on the Opentype font, but changing the tracking will prevent some of the Opentype features from working. 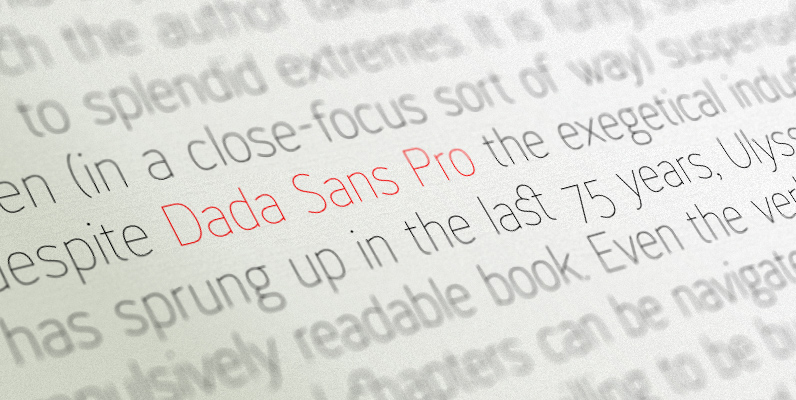 Dada Sans Pro is simple in form but elegant font with huge language support and OpenType features such as ligatures,

END_OF_DOCUMENT_TOKEN_TO_BE_REPLACED 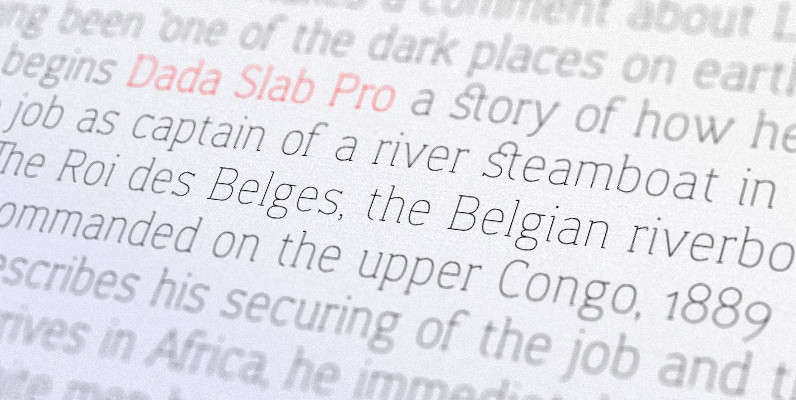 Dada Slab Pro is simple in form but an elegant font with huge language support and open-type features like ligatures,